Are you a chef or a cook?  Do you cook often at home?  Have you ever made a recipe with fresh basil, oregano, or lemon zest?  If so, congratulations... you're an official terpene connoisseur!

The reality is, you've been cooking with terpenes and eating them for your entire life.  So, what makes them so special and popular now?  Cannabis.

Warning:  I'm going to take you down a rabbit hole for a few moments... but it'll make a lot of sense in the end!

Let's get started by defining what a cannabis edible is.  A cannabis edible is any product that contains cannabinoids that you swallow.  Another term that many people are using to replace edible, is ingestible.  For the sake of familiarity, we'll stick to edible for now.  Edibles include any infused food or beverage product, from the stereotypical pot brownie, to a Michelin Star ten course dining experience that includes infused cocktails and coffee.

There are many products that fall under the sublingual category that also fall under the edible category.  Tinctures, gum, suckers, candy, mints, lozenges, and other products that are held in the mouth for an extended period of time, make it possible for the cannabinoids to be absorbed sublingually.  However, in order for a sublingual product to be effective, it must be held in the mouth (ideally under the tongue) for 1-3 minutes before swallowing.  As the clock ticks, what's happening?  Your mouth is creating a bunch fo saliva that is eventually swallowed!  So, what happens next?  You end up swallowing the some of the remaining active compounds, which is no different than any other edible product.  Technically, there is no such thing as a 100% sublingual cannabis product (at this time).

Sublingual medications are able to bypass first pass metabolism and enter the bloodstream quickly, significantly increasing the time of onset effects.  Since sublingual medications and drugs are not (supposed to be) metabolized by the liver, their functional forms are different than those that do.

In order to benefit from the effects of cannabis, the majority of cannabinoids must undergo decarboxylation first.  In a nutshell, this process activates the cannabinoids through heat, making them significantly more effect than their raw forms, and this is required in order to make you feel any kind of high from THC.

D9-THCA is heated and transformed into D9-THC.  Long story short, the A evaporates off, allowing the shape of the cannabinoid to "fit" into the "locks" of your CB1 receptors... which makes you feel high.

When you consume a decarbed sublingual product, the active D9-THC is absorbed sublingually and gets to work within 10-20 minutes.  However, when you swallow D9-THC, about half (depending on liver health and other variables) of that D9-THC gets converted to 11-Hydroxy-THC, which is significantly stronger than D9-THC and last 2-4 times longer.

So, if a sublingual product is properly absorbed, a lot more D9-THC gets into your system, minimizing the metabolism and creation of 11-Hydroxy-THC, which will result in a less intense high compared to an edible.

Brandon - why the hell are you talking about sublinguals and 11-Hydroxy-THC when the title of your blog says it's supposed to be about terpenes?  Ok, here we go...

I've said it a million times and I'll say it a trillion more - CONSUMPTION DETERMINES FUNCTION.

The reason I explained the difference between an edible and a sublingual, the conversion of D9-THCA to D9-THC, and the metabolism of D9-THC into 11-Hydroxy-THC, is to permanently plant into your mind that THINGS CHANGE, depending on how they are processed and how they are consumed.  Just like how cannabinoids change from THCA, to THC, to 11-Hydroxy-THC, to even more metabolites, the same thing happens with terpenes.

What's important to understand is that the effects of terpenes are based on the structure of the terpene.  The process of lighting cannabis on fire and immediately inhaling it into your lungs, is very different than taking cannabis flower, decarbing it, infusing it into food, chewing it, swallowing it, breaking it down with your stomach acid, digesting it, and metabolizing some of those remaining compounds with your liver before they enter your bloodstream.  Whew!

Just as D9-THCA is first transformed and activated through decarboxylation, changing it's form and function, the same thing happens with terpenes.  However, terpenes are much more volatile (sensitive) and go through various transformation processes a lot easier than most cannabinoids.  Think of it this way... the limonene that's inside your ganja, could actually be different than the form of limonene that you're actually smelling, which evaporated out of the trichome head and found it's way into your nose.  When you add lemon zest into a creamy pasta sauce and reduce it down to thicken the consistency, the heat of the sauce is then transforming the fresh limonene in the zest, into a completely different form.  When you eat the sauce, your stomach acid then changes that cooked form of limonene into something else, sometimes several things in fact, and then by the time your liver gets ahold of those various forms of limonene, it could be damn near unrecognizable from it's original form.

What does this mean for cannabis edibles?  What it means is that the effects of inhaling cannabis are very different from digesting it because you're not consuming the same thing.  Not just from a cannabinoid perspective, but from a terpene perspective as well.  When you smoke or vape a specific cannabis variety, the effects are driven by the cannabinoids and the terpenes (and other compounds yet to be fully understood).  The vaporization of the terpenes and immediate inhalation of them, essentially allow you to "capture" certain forms of them, that then interact with various receptors (not CB receptors, other receptors that modulate neurotransmitters and hormones), and they work together with the cannabinoids, primarily THC, to produce a spectrum of effects that range from sedative to stimulating.  However, if you were to make an edible out of the exact same flower or extract, those some compounds aren't being "captured" by the body in the same way, therefore it's impossible for the effects to be the same. 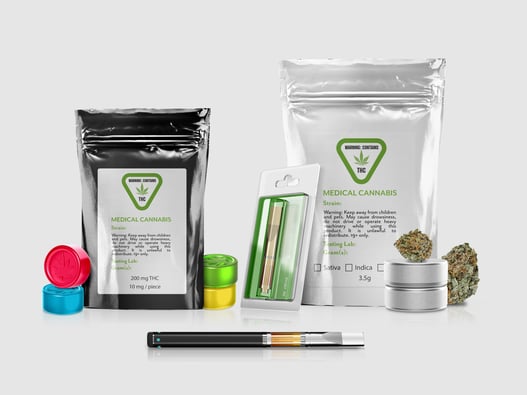 So, what DO terpenes DO for edibles?

It's simple!  Terpenes change the flavor and aroma of food!  That's right, they are no different than any other spice, herb, or fresh produce you have in your pantry or fridge!  Remember, you've been cooking with terpenes forever, but now due to the popularity of cannabis, terpenes are now available in isolated forms, which allow you as a chef or cook, to have fun with recipes by manipulating the flavor, aroma, and mouthfeel of a dish.  Be sure to check out the Cooking with Cannabis course to learn all about how you can incorporate terpenes into your recipes!

Now, just because ingested terpenes do not mirror the effects of inhaled terpenes with cannabis, it doesn't mean that they can't do anything.  Some terpenes, at the right dose, depending on how they are consumed, have shown to have some amazing physiological effects.  From reducing inflammation to helping with depression, studies have indicated that terpenes can do some pretty wild things.  But, from a chef or cook's perspective, the only thing you should worry about with terpenes in your kitchen, is making sure they compliment and pair well in a recipe.  Instead of making a bunch of medical claims about terpenes, focus on what we definitively know: they can totally change how food is experienced!

So, the next time you see the terms "Indica" or "Sativa" on an edible, or any other claims about the effects of the edibles, don't think terpenes.  Instead, think about the cannabinoid profile and other ingredients in the edible that would be a driving force to create a specific effect, such as melatonin, caffeine, a bunch of sugar, or chamomile.

In Terpenes We Trust (for flavor, aroma, and mouthfeel)

A lot of people talk about cannabis and alcohol in the sense of whether or not they should be...

Jamie Evans is the founder of The Herb Somm, the author of multiple books and the creator or...