A Curing Debate: What does it mean to properly cure cannabis? 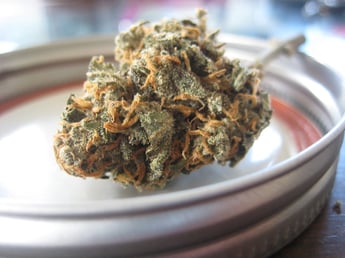 It’s not uncommon for OG’s to engage in healthy debates over how to grow, cure, or extract cannabis.  Recently, I had a bizarre curing debate with a twenty-year veteran who owns a nice dispensary and grow. In fact, his garden is damn near immaculate and he even hires scientists as growers to ensure the highest quality organic cannabis available. You would imagine with a team and operation like this, the rest of the finished product would be primo dankness… but that’s where things get a bit sticky.

When I approached the counter at the dispensary, I didn’t even have to open a jar to notice something strikingly funky about the flower (not the good funky).  When you’re used to seeing fresh, vibrant green indoor grown Colorado flower all the time, any discolored (tan/brownish) flower sticks out like a sore thumb.  Once I opened one of the jars, my bloodhound nostrils and olfactory bulb confirmed just what I suspected, old weed! This legal dispensary sold medicine to strictly card holding patients and all of their flower was completely stale, discolored, and lacked pungent aromatics. For those of you who don't know, the smell of old weed is semi sweet, a bit acrid, with a hint of human urine (seriously).

When I asked why all the flower looked like this, the response was pretty incredible coming from a guy who knows so much about producing cannabis. He responded with, “You know, it's so frustrating when you’re the only one out of nearly a thousand dispensaries who actually cures cannabis right.  No one else gets it besides me.  I have been slow curing my cannabis for twenty years and people wonder why my shop has a line out the door”.

The shop didn't have a line out the door when we were there… or any other time I’d driven by.

When I asked him to break down this 6-month slow cure process for me, he attacked me for claiming to know a lot about cannabis.  After this little insult he continued to explain how almost all the most decadent things in life are slowly cured and aged, like fine wine, beer, and cheese.  I tried to interject with some facts about terpene chemistry with a beer analogy as a counter-example, but was quickly cut off with his rambling about how "everything that’s aged is better quality"  and no logical or scientific reasons to back up the stance.

The Truth About Curing Cannabis

Every operation has its own unique way of doing things and I totally respect that.  From my experience and expertise good-quality cannabis must be cured. Curing means to age the product in a way that allows it to mature within itself almost like the magic that occurs in a chrysalis. To a brand new grower, the speedy evolution and rollercoaster of post harvest aromatics coming and going, smelling like hay and then turning into a mouth watering stench, can be quite an emotional ride. At first you think you just screwed up months of hard work, but then a butterfly emerges (if you do it right) and it’s totally exhilarating.

The dispensary owner is right that many fine consumables such as cigars and other tobacco products, wine, whiskey, certain styles of beer, and even coffee have necessary curing and aging processes.  At the same time you’ll never find anyone curing and aging freshly harvested broccoli, string beans, or tomatoes, to make them even fresher!  So what about weed?  Where does it fall in the spectrum of juicy, ripe tomatoes to whiskey and aged stouts?

Some high alcohol beers may be aged due to the amount of alcohol in the liquid used for sterilization against bacteria. You’ll also notice beers made for aging are usually in dark glass and sometimes wax-dipped. Certain bourbon barrel-aged stouts have ingredients in them that necessitate a cure time. But these beers are rare compared to the plethora of other beers on the market. “Mr. OG” believes fine cannabis should be aged for a long time just because fine wines are - even though beer, more closely related to cannabis through hops, really isn’t aged. So why age weed exactly?

Comparing the curing process of cannabis to that of wine, cheese, or beer just doesn’t make sense.

Wine is not a grape and cheese is not milk, they are both extracts from their starting sources. Cannabis extracts, like oils, can be more stable than the flower for the same reasons, but it depends on the extract type. Not only are wine and cheese extracts, they are preserved in dark glass and wax with almost no room for oxygen or light to prevent degradation.

Typically, in the black and legal market cannabis is not packaged or stored the way wine and cheese are. Often times weed sits in plastic or glass jars on a shelf, oxygenating and degrading day by day; particularly due to the sensitivity of trichomes and the volatility of the terpenes. Using vacuum sealed bags does help but are they really closing the bags tightly with minimal air? How long is the weed sitting in these bags for? Does the industry have regulations for flower shelf time? Nope!

The Goal of Curing Cannabis

The goal of a proper cure is to further develop and preserve the cannabis plant material and the fragile trichomes it produces.  Some people enjoy dry cannabis so when they crush it with their fingers it disintegrates into a fine powder to smoke, with no need for a grinder.  This is common with lot of Colorado flower because of the elevation and low humidity.  On the opposite side of things, no one wants to smoke nearly wet flower because it does not burn.  In my opinion, along with many others, the perfect weed to smoke is somewhere between 11-12% water retention.  Flower should be like a semi-dry-sponge in its texture and density, with a subtle push and give…

Is there a perfect cure-time and process? Is my drying, curing, and burping SOP the absolute best and should everyone use it? No, and here’s why.  Some of you are reading this from Arizona, others in Spain, and based on our analytics we even have people from Russia and New Zealand that receive our newsletters!  Where you are depends on how you should go about your particular drying and curing process. For example, if you live in Jamaica, your SOP should be the opposite of mine in Colorado because our local environments are so drastically different.  However, even though our drying methods may be completely different, the goal is the same - preserving the trichomes and thus the chemistry within them.

Preserving flower means to cure your herb in such a highly focused way that the stem of the flower slowly bleeds its life force energy into the inflorescence for weeks, if not months.  This “life force energy” if you will, (it’s just minimal water retention post dry) ever so slowly keeps the glandular trichomes from drying out until they are forced to eventually give up.  The longer you can keep the trichomes from dehydrating, the longer you’ll preserve the imminent loss of the oh-so sacred and fragile cannabis aromatics; where the real magic is.. The longer you preserve your terpenes, the longer your herb will retain not only its smell, but its potency. That is the goal of curing..

Ethan Russo explains “terpenoids produce a high range of biological activity possibly including modulation of the effects of Δ9-THC via their own anxiolytic, sedative, analgesic, antinociceptive, and anti depressant effects”. Additional research indicates the medicinal properties of terpenes, “Other actions of terpenes include anti-inflammatory, anti inflammatory, antibiotic, and anti-mutagenic” (Maffei et al. 2011). Cannabinoids are typically stable, they will stay in your herb much longer than terpenes even though cannabinoids due eventually transform into other cannabinoids.

“Yields of cannabis essential oil (terpenes) obtained from fresh plants through steam distillation range from 0.5%-0.29% v/w and represent 10% of trichome content. Of course this, varies greatly with growing, drying, and harvest conditions. After storage for 3 months, approximately 55.2% of volatile constituents were lost. (Hazekamp 2008-2009; Ross and Elsohly 1996.) Monoterpenoids typically predominate in the volatile oil of cannabis and comprise 47.9%-92.48% of oil extracted from fresh plant material”. (Mediavilla and Steinemann 1997; Ross ElSohly 1996)

“Monoterpenes are volatile compounds and their content decreases during drying and storage of cannabis as demonstrated by Ross and ElSohly (1996). After three months of drying and storing cannabis in closed paper bags at room temperature, the terpene B-myrcene gradually decreased from 67.11% to 32.88%.”(AHP 2013 p. 37) That’s a 50 percent decrease in just three months! B-myrcene is recognized as having sedative, muscle relaxant (do Vale et al. 2002), anti-inflammatory, and analgesic activities (Lorenzetti et al. 1991; Rao et al. 1990)

B-myrcene is the most abundant monoterpene within hops and cannabis trichomes, by a huge percentage. Therefore, since B-Myrcene is the most common terpene found in cannabis and since it has pharmacological effects and potentially stimulates THC, you do not want to store your cannabis for so long or so poorly that these chemical elements disappear. Your herb retaining its dank smell and its potency, is the goal…

When you store cannabis over time, even if you store it in the proper temperature, ideal light conditions, and correct containers, the plant material will degrade over time until it is stale and old just like broccoli. Its not cheese vacuumed in wax… Old cannabis has a funky smell to it. The color turns tan, brown, or even gray. The flavor (terpenes) disintegrates, resulting in the taste of old and bland product. Thus, you will lose quality, flavor, potency, and pleasure.

If you leave a glass of wine out for a few days and then drink it, you can taste the wine, but the alcohol has evaporated, and the subtle flavors have gone flat. The pleasant effect that one might have derived from drinking the wine has disappeared. This is what smoking a six-month old bud is like especially if it wasn't cured properly. On the contrary, I have seen amazing eight-month old flower kept in turkey bags, in the Emerald Triangle, by OG’s who have a few tricks in their bags.

My practice for initiating the curing phase of the flower is to let the buds dry on the stem, upside down, all leaf on, in my dark, cool, dry, basement, for 3-5 days. If you place wet buds in a sealed container they will develop jar-rot quickly and you will lose everything. A good method for determining when to place your buds in storage is to feel the stem, making sure it’s slightly flexible yet maybe a day or two away from snapping if bent. (It still has its life force energy…)

When you place your buds in a jar, you must open the containers to let the buds breathe at least once a day until there’s only 12% water retention in the flowers. This is what we refer to as burping in the industry. It is also a good practice to stir and rotate the buds when letting them breathe. After you burp and stir your buds for a week or so, your buds should be ready to be sealed until you need to access them. If you cure your buds properly they should be firm, not wet, not dry, they should smell pungent, burn well when smoked, and will stay this way for a few months.

What is the primary purpose of cannabis terpenes?

There are over 20,000 characterized terpenes in the plant kingdom, including monoterpenes,...

You may have seen a rare cannabis type called Freakshow with wild looking fern like leaves...

Can weed lotion make you fail a drug test or become high?

One of the most common questions we're asked from all walks of life: can THC lotion make you feel...